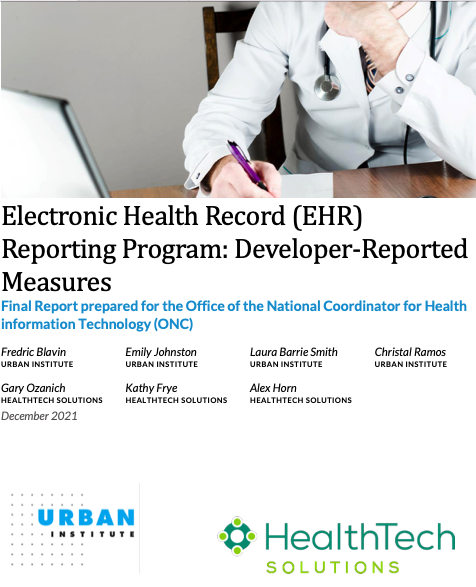 As part of the ONC Health IT Certification Program, Congress mandated the establishment of an Electronic Health Record (EHR) Reporting Program to help determine the effectiveness of the program. The first step toward implementation was the development of an initial set of CEHRT developer metrics which were released in draft form in December 2021. When finalized, these metrics will represent data that EHR vendors will have to report to ONC as a Condition and Maintenance of Certification.

The initial focus of the metrics developed was interoperability, and public health was one of four categories considered. The metrics themselves include sending vaccination data to an immunization information system (IIS) as well as querying an IIS for vaccination data (identified too narrowly in one table in the report as “Immunization forecasts”). There is some nuanced discussion around the meaning, usefulness and potential cost to vendors to provide data relative to this measurement. The differences between how IIS support these functions was one area of concern attributed to vendors in their comments.

From a public health standpoint, the metrics certainly pick the low-hanging fruit. Metrics for immunization submission and query/response should be pretty standard fare, though the devil is always in the details: exceptions are recommended for sites that do not administer vaccines; recognition that IIS differ in how they respond to queries. The initial recommendations were adjusted to reflect some pushback on the feasibility of supporting these measures by EHR vendors.

Future recommendations would focus on “submission of data to public health via third-party apps or Application Programming Interfaces (APIs),” though I don’t see why current EHR-IIS interoperability would not qualify as API-based (see my detailed journal article on this). I also do not understand how the other future-oriented suggestion, “Percentage of patients using write-back functionality on the third party, registered patient-facing apps,” has anything to do with public health. I would hope that given the sharp increase in the deployment of electronic case reporting (eCR) that a future metric would include measurement of this important public health activity.

Send us feedback about this blog